In Easter Week 1987, the Cathedral Choir went on tour to Rome (including a visit to St Peter's) and, as part of the preparation for any tour, there was much fund raising to be done. The senior choristers of the time decided to found the Three Spires Orchestra which was made up of the choristers and was directed by one of the senior choristers. These images are a copy of the concert programme (with the cover also designed by a senior chorister) for the fund raising concert held on 21 February 1987 in St Chad's, Sutton Coldfield. 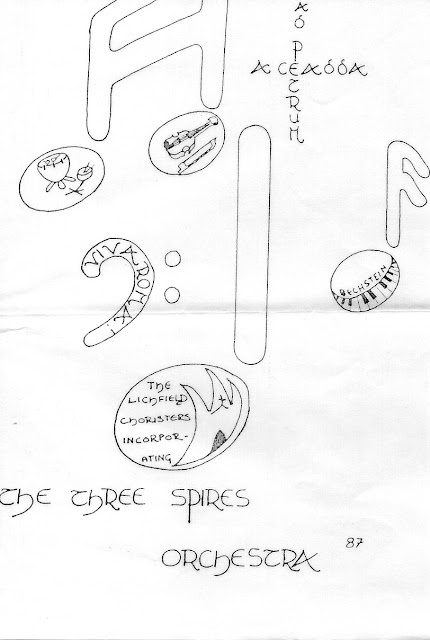 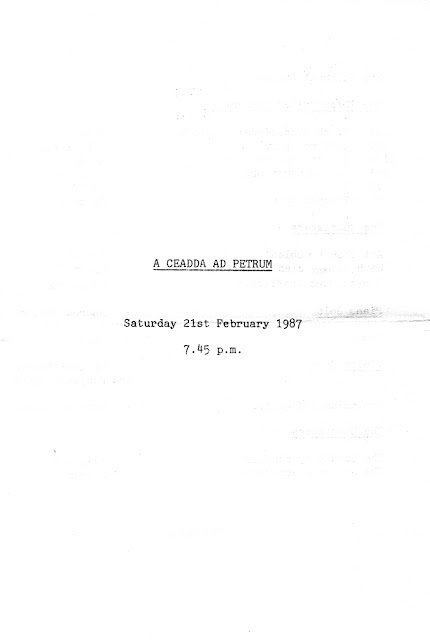 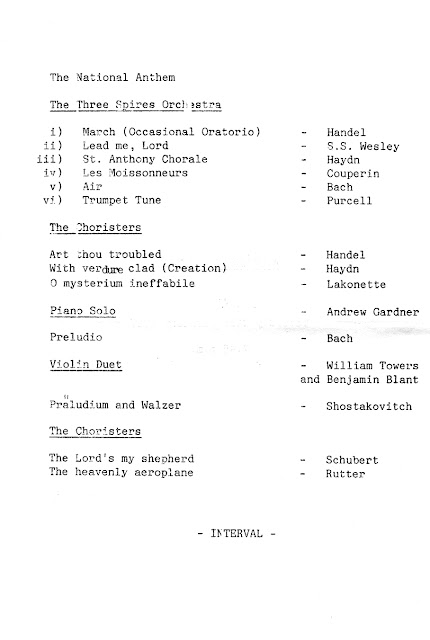 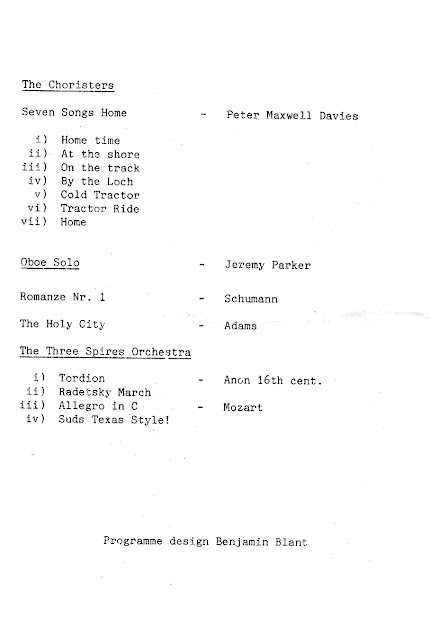 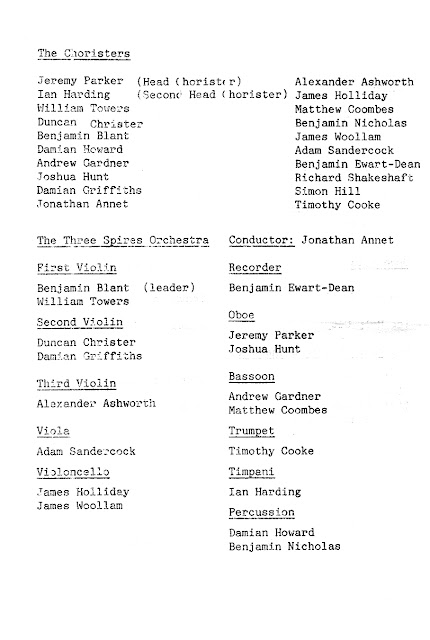 One enterprising member of the audience recorded the entire concert and, bearing in mind the effect of nearly 30 years passing on video tapes themselves, the entire performance - which demonstrates the instrumental and choral skills of the choristers as a body and of some individuals - is the first multimedia item in the new archive.

Having enjoyed putting on the concert, just before the senior choristers left they somehow obtained permission to hold a second concert - this time in the Cathedral - as another charitable venture on 18 July, 1987. This was the programme for the Three Spires Orchestra's final performance, although there is no recording of this available: 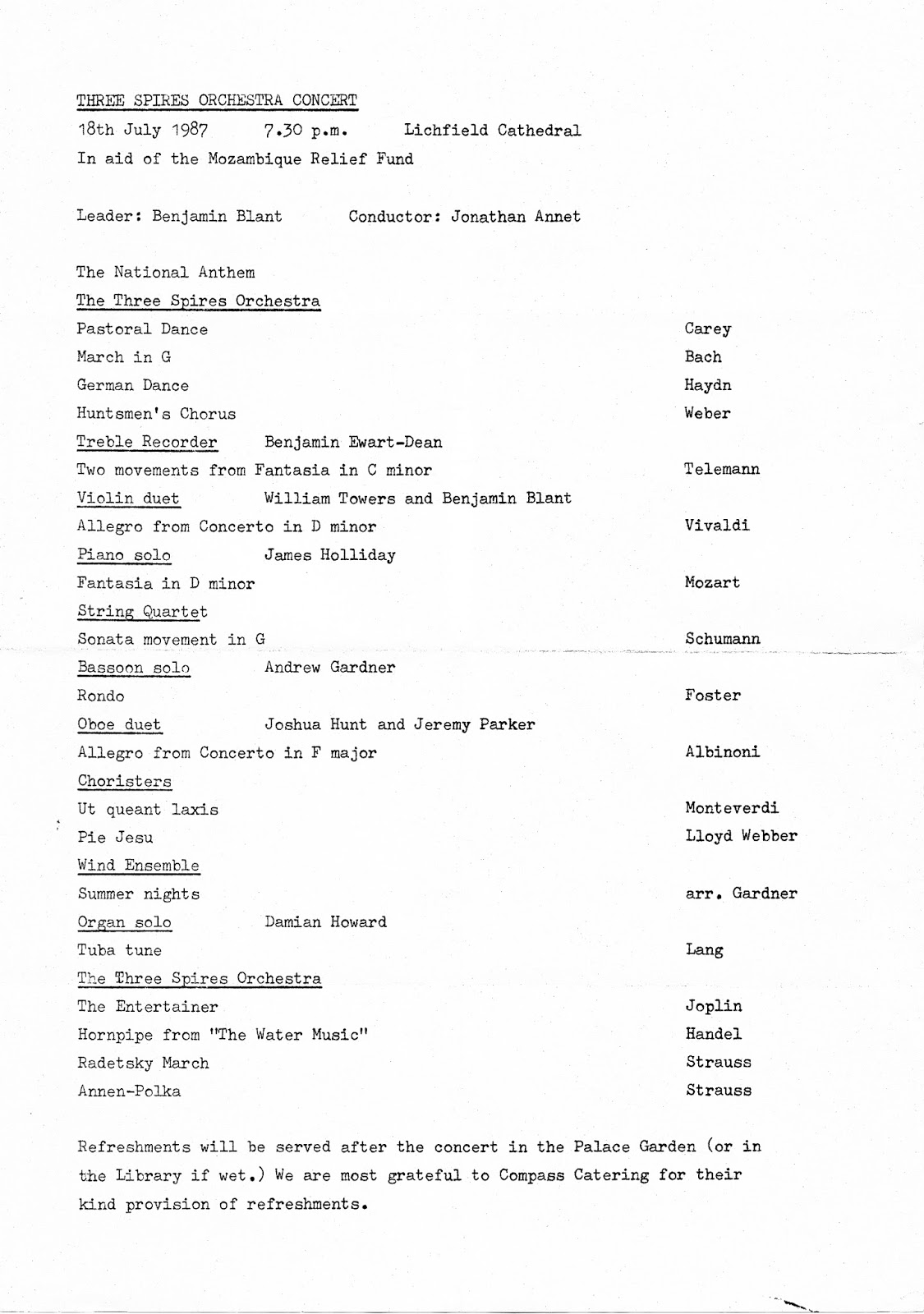 Posted by Richard Shakeshaft at 12:30 No comments:

Lichfield Cathedral Choir has had an online presence at www.cathedralchoir.org.uk since 2000 when we thought it sounded like quite a fun idea after chatting about it over a post-Evensong pint. The beer-infused idea ultimately meant that it was the first cathedral choir to have such a virtual existence. Amongst a variety of other historical material (particularly about former choristers and Lay Vicars), for all that time the website has hosted the weekly/monthly music lists and these have built up a formidable archive (going back to 1997 as they were available on my personal website from that time).

Since then, it launched Twitter and Facebook accounts in 2012 which have allowed far greater and more immediate interaction with both individuals and digital media, not least through the increasingly regular and increasingly popular #AdventQuiz and #LentQuiz, but also through the daily publication of details of choral services.

All of this adds up to a somewhat exciting digital presence, but as the world shows little sign of moving away from all things electronic, this is the next step.

Over the years, people have got in touch to submit material which they have acquired relating to the Cathedral Choir that they no longer want but know it might be of interest to someone. I generally endeavour to digitise anything that is submitted to ensure that it is preserved, but it then usually just sits gathering metaphorical dust on a hard disk somewhere.

People also get in touch - sometimes directly and sometimes through the Cathedral - to ask about their predecessors who they believe have been connected with the foundation. Where possible, I and/or other long-standing members of the choral foundation try to help them out with information about relatives that we can find, based either on personal knowledge or research we have done at various times. This information is usually then just passed back via email and forgotten about.

However, both of these have generated a wealth of interesting material, so it is my intention to start making it available online for a wider public's delectation. As the type of material is so disparate, this seemed the most straightforward way of centralising links to a variety of sources and not compromising the website's position as a comprehensive source of current information.

This online archive will therefore grow to include audio and visual material, information about specific events, particular people, the foundation, the choristers' antics and whatever else we encounter. It will be a mishmash of historical curios spanning centuries and of interest to locals, long-standing supporters and visitors alike; hopefully Google's indexing prowess will also help people to make sense of it as the quantity of material increases.

If you have material that you would like to submit, an e-mail to me - webmaster@cathedralchoir.org.uk - is the easiest way to start the process, but otherwise, I hope you will have as much fun wading through the archives as it is to curate it.
Posted by Richard Shakeshaft at 20:11 No comments: