Exactly 28 years ago today, BBC Radio 4 broadcast a short, 13 minute, programme looking at the role of cathedral and college choirs "in a changing society and changing musical climate" (http://genome.ch.bbc.co.uk/f592def96f7c4ff888271572c788dcbe).

The two institutions chosen to represent the "ecclesiastical choral tradition" are Lichfield Cathedral and King's College, Cambridge. The programme features recordings from each choir, and interviews with the directors (Jonathan Rees-Williams and Stephen Cleobury, respectively) and singers from each choir. A recording of the programme has been made available to me and it is now available for a wider audience in the Cathedral Choir's media archive.


Nearly three decades on, this offers an interesting glimpse into the historical situation, but comparisons will inevitably be made between 1989 and 2017 and it is interesting to see some of the same challenges still faced by choirs today.
Posted by Richard Shakeshaft at 16:45 No comments:

Memories of Life as a Chorister 1942-1945 from David Stembridge

This account was originally sent to members of the Lichfield Cathedral Former Choristers' Association in 2014 and is reprinted here with permission.

I am grateful to Michael Cockin, Richard Lloyd, Colin Smith and Geoffrey Walker for their recollections and for confirming my own memories.

The day started at 7.00am with a jug of cold water being poured over one’s neck, administered by the headmaster, the Reverend Egerton Walters. It was wise to lean well over the edge of the bath to avoid the water running down one’s back. Thereafter, we ran around the Close before breakfast.

Lessons, including Latin and French, followed the usual school curriculum save that every day at midday we assembled in the for choir practice conducted by the Organist and Master of the Choristers, Ambrose Porter.

The song room was at the end of a passage behind the Dean Savage library. We were able to observe Ambrose’s approach and had time to be at our allotted seats by the time he entered the room. Ambrose was a kindly man, nicknamed by us as ‘Potegg’ as he was short and stout. He was exclusively in control of our musical life and undoubtedly he became the most important figure in our school lives. He sat at the piano on a high hassock in a low-backed chair which we christened ‘the egg-cup’.

Once a week, apart from choir practice, Ambrose held a ‘sing song’ lesson. We enjoyed singing various songs from a collection by Adam Carse who is little known today: it made a pleasant change from anthems and settings. A particular favourite song was I wandered lonely as a cloud by Clifford Harker who went on to become the Organist of Bristol Cathedral.

On Saturdays we had an additional choir practice with the men in the Cathedral.

By Eastertime, Ambrose had succeeded in training us into a cohesive choir ready to appear on Easter day in our red cassocks and surplices. I remember singing the Easter Carol This joyful Eastertide which has remained a firm personal favourite.

I always sat on the Cantoris side under the watchful eye of the Headmaster who sat on the Decani side: woe betide anyone who was seen to laugh. Sometimes the men behind us made jokes which made it difficult to keep a straight face.

The services consisted of Sunday Matins followed by Sung Eucharist (on alternate Sundays) and Evensong at 3.30pm. On weekdays we sang Evensong on Tuesdays and Saturdays, and on Friday morning we sang the Litany Service. There were additional services on Saints’ days.

Discipline was quite strict and certainly the Headmaster was not averse to using the cane on one’s backside. An instruction to go and wait outside the headmaster’s study invariably meant corporal punishment would be administered. It was usually four or six strokes and a victim was expected to display his stripes in the dormitory to his fellow pupils.

The school’s first playing field was behind church some distance from the Close; it is now used by the city tennis club. The next playing field was by Stowe Pool and finally the school took over the playing fields beyond the stark building, Selwyn House, at the end of the Close, then used as a . I recall Dean Iremonger telling us the story how one old lady had a squabble with her sister who lived by St Chad’s Church in a house with an uninterrupted view of the Cathedral across Stowe pool: out of spite the other sister erected this tall building so as to spoil the view!

Dean Iremonger was a bachelor who lived in a small house in 9, The Close which is the present Cathedral Shop. He took a kindly interest in the choir and had strong views about what music should be sung in the Cathedral; Ambrose was obliged to respect his wishes. For instance, Stainer’s music was not generally acceptable although there were some exceptions, including I saw the Lord.

Mr Dodd, the Head Verger, lived next door and escorted the Dean to the Cathedral; Mr Dodd wore an unusual hat for these occasions. Because the Dean did not wish to live in the Deanery, this building became available for the School in about 1944. .

The headmaster and his family moved into one half as their residence and a number of the choristers moved into the other part. I was fortunate to move to the Deanery and certainly the dormitory was a very pleasant room. We continued to use School House (12, The Close) for all meals. There was a Broadwood grand piano in the large room in the Deanery on which we were allowed to practise.

Being wartime, the culinary standards were not exciting. There was an element of compulsion about eating all the food on one’s plate. I recall I had some difficulty, particularly with some fish which smelt somewhat differently from the fish I eat today! However, I do remember that ‘spotted dick’ was a firm favourite. I recall one boy, Booth, was adept at cleaning every spot of jam out of a jam jar with a knife; by the time he had finished, nothing was left.

Because of the shortage of sweets many of us brought jars of malt and cod liver oil to school. The matron kept our jars in a storeroom and after breakfast we would be given a dessert spoon to enable us to take one or two spoonfuls of malt. It was regarded as a treat by some of us and was no doubt an important contribution to our diet.

We were allowed to walk down into the town and the chemist’s shop was an important port of call for glucose tablets and meloids, a liquorice based throat sweet; occasionally it was possible to find a bar of Cadbury’s ration chocolate.
Posted by Richard Shakeshaft at 11:37 No comments:

A slightly convoluted series of events led to this photograph being discovered in the Lichfield Cathedral School archives a few months ago. It shows the choristers standing on the steps leading to the South transept door after a recording session for the Ascensiontide Evensong LP in summer 1970. 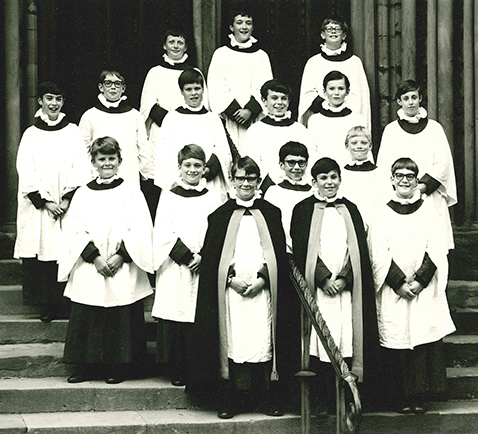 The inscription on the reverse of the image reads:

The Choristers after a recording session within Cathedral, Summer Term 1970.

(Jeremy Grinnell-Moore was in bed, Roger Langford and James Newell - new and too young)

Posted by Richard Shakeshaft at 13:53 No comments: