Recorded in summer 1990 and broadcast at the start of the new academic year, this edition of Songs of Praise featured cathedral choirs from the Northern Division of the Choir Schools Association. Filmed in Lichfield Cathedral, it also marked the first public engagement of the Patron of the CSA, HRH The Duchess of Kent.

Cathedrals which I know are represented alongside Lichfield include Lincoln, Liverpool, Edinburgh, York and Wakefield, but please let me know if there are others so I can update this list.


The choir booklet reveals that on the day itself just an hour and a quarter (from 11.00am until 12.15pm) was allowed for the television rehearsal, with the recording starting at 1.45pm and finishing at 6.00pm.

While the original video that we were given had clearly been watched, we are grateful to the Archive of Recorded Church Music which has provided a link to a better quality copy in their archives.
The magazine of the Choir Schools' Association, 'Choir Schools Today', included the following article and photograph in their 1990 edition (issue 5), and the cover photograph (below) shows 5 year-old Samantha Wright, a pupil at Lichfield Cathedral School, greeting HRH The Duchess of Kent on her arrival for the 'Songs of Praise' recording; beside her is the Very Reverend John Lang, Dean of Lichfield.
1990 High Spot

More than 8 million viewers tuned in to watch BBC Songs of Praise with the Choir Schools Association at Lichfield Cathedral.
The Cathedral was packed with over 800 boys and girls for the programme broadcast on 9 September. Not only was this the first occasion to bring together choristers from eleven of our Northern CSA members, but it was the first public appearance of Her Royal Highness The Duchess of Kent, as Patron of the Association. Her Royal Highness was interviewed by Ian Gall on her role at the end of the programme.
Viewers were treated to a combined choir of some 200 choristers leading the singing. The home team got off lightly with a gentle stroll across The Close. For some it was an early start, 5am for the Edinburgh contingent. The long journey was followed by a hectic schedule of rehearsals and recording before the drive home.
Jonathan Rees-Williams, Lichfield Cathedral Organist, conducted the choristers. "I was very pleased with the day. Choristers are usually very quick to learn, but on this occasion they excelled themselves as they met the BBC's very exacting standards. A great deal of credit is due to all the boys, but particularly those who had travelled so far to join us."
The programme included old favourites such as Dear Lord and Father and Angel voices ever singing. At the same time the programme premiered a piece commissioned specially for Songs of Praise. Let God be praised was written by Brian Morris, Principal of St David's University College at Lampeter, with music by CSA Chairman, Richard Shephard.
Presenter Ian Gall interviewed Richard about the Association, along with a variety of others involved. We heard all about choir school from several viewpoints: matron, choristers, and ex-choristers.
This is an ideal opportunity to say thank you on behalf of CSA. 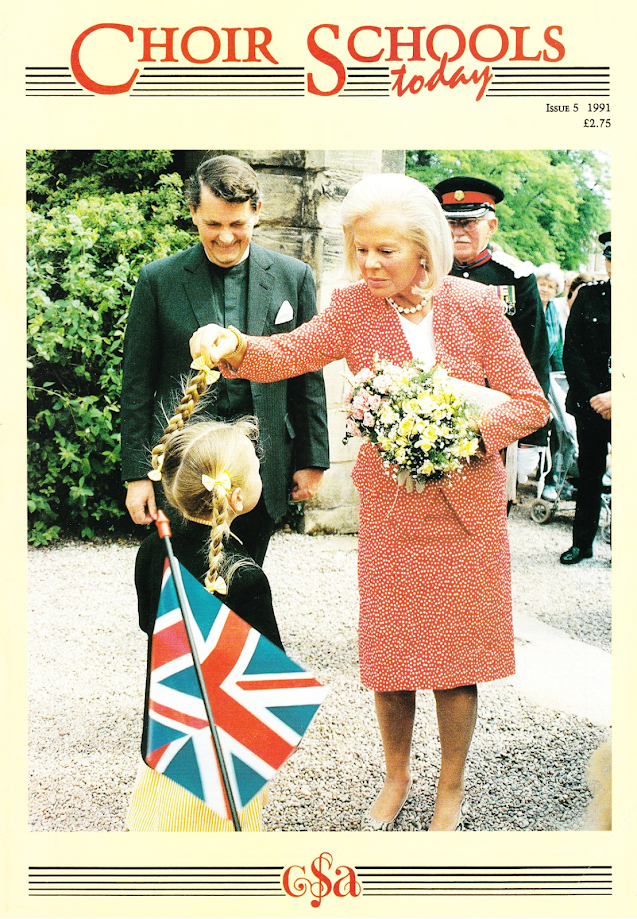 Posted by Richard Shakeshaft at 10:00 No comments: