This weekend marks Michael Guest's final weekend in the choir after just over 40 years. In this time, he has served under four Bishops, five Deans, six Precentors, six Directors of Music, six Organists, and seen 17 basses, 13 tenors, 24 altos (one of whom, twice) and over 200 Choristers come and go.

This is a copy of the advertisement to which he responded, and the letter from the Dean, George Holderness, offering him the post. He duly started in September 1977 and was officially installed into the Lay Vicar's stall of Longdon on St Lucy's Day, 13 December, 1977. 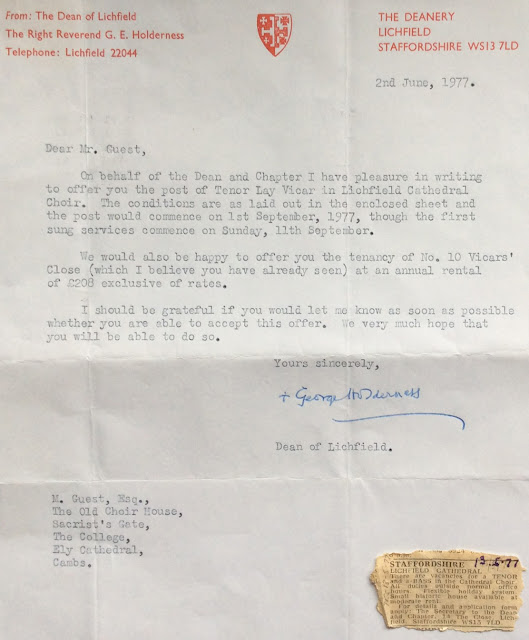 The text of the advertisement from May 1977 reads:

There are vacancies for a TENOR and a BASS in the Cathedral Choir. All duties outside normal office hours. Flexible holiday system. Small historic house available at moderate rent.

For details and application form apply: The Secretary to the Dean and Chapter, 14 The Close, Lichfield, Staffordshire, WS13 7LD.

On behalf of the Dean and Chapter I have pleasure in writing to offer you the post of Tenor Lay Vicar in Lichfield Cathedral Choir. The conditions are as laid out in the enclosed sheet and the post would commence on 1st September, 1977, though the first sung services commence on Sunday, 11th September.

We would also be happy to offer you the tenancy of No. 10 Vicars' Close (which I believe you have already seen) at an annual rental of £208 exclusive of rates.

I should be grateful if you would let me know as soon as possible whether you are able to accept this offer. We very much hope that you will be able to do so.

Posted by Richard Shakeshaft at 09:30 No comments: