Last year, I was contacted by someone researching their family history, as they discovered that they were related to John Bennett who was a Lay Vicar at Lichfield. I was able to provide some information about Bennett's time in Lichfield which forms part of the research that the original enquirer, Humphrey Palmer, incorporated into biography of Bennett. Bennett's biography is reproduced here from Palmer's research in an edited form.

John Bennett was baptised on 19 January 1771 at the Parish Church of the Blessed Virgin Mary, Southwell, Nottinghamshire; he was the son of William Bennett and Mary Johnson. John was the fourth of nine children. By 1781 he was singing in the choir of St Mary the Virgin, Southwell, and he left when his voice broke on 21 July 1785. At least five of the children of William and Mary died before the age of 10. At the age of 22, John married Ann Nattrass at St Michael's Church, Hoveringham, on the 21 May 1793; she was 20 years old.

Bennett became a probationer at the Southwell School, and appears in a list of singing men at the beginning of 1799; he was admitted to the Southwell Collegiate Church as a singing man in the category of a Bass singer on 17 April 1800 at the age of 29. He would have been under the Organist Thomas Spofforth whilst at Southwell, and he may have come into contact with the Reverend John Thomas Becher who commissioned and built the Workhouse at Southwell (this was, in principle, the layout for most of the Workhouses throughout Great Britain).

Bennett remained at Southwell for nearly seven years, and at the age of 36 he was appointed as a Lay Clerk at Worcester Cathedral. Bennett's youngest son, Corneluis, would have only been about 1 year old when Bennett was appointed, and it seems that the whole family moved to Worcester in 1807. During his time in the choir at Worcester, Bennett would have been singing in the annual Three Choirs Festival.

George Bennett, John's eldest son, had moved to Worcester with the family in 1807, but he seems to have moved to Durham sometime after 1808. He became a member of the Cathedral Choir, and married Sarah Bird at the end of 1819 at the church of St Giles in Durham; they had two girls and two boys, but both the girls died young.

Bennett remained at Worcester until the middle of 1818, when the position of Vicar Choral belonging to the Prebend of Bishophull in the Cathedral Church at Lichfield became vacant on the death of Thomas Birch who had served for 45 years since 1773 in that role. At this time, there were a total of seven vicars choral at Lichfield Cathedral. Samuel Spofforth, the nephew of Thomas Spofforth, was the Organist at Lichfield from 1807 to 1864. (Spofforth was buried in the same year as Matthew Bennett, who never married and was a Dancing Master at Lichfield and lived in The Close Lichfield.)

Bennett was elected to the Lay Vicarship having the majority of the vicars in his favour and the Dean and Chapter being satisfied as to his life from the Dean and Chapter of Worcester. His daughter, Mary, stayed in Worcester and married George Vaughan Palmer on 12 July 1821; they had a daughter Jemima prior to their marriage in 1820 who may have been John's first grandchild. John's wife, Ann, must have visited Worcester on many occasions, as she died and was buried at St Peter's, Worcester in September 1827, where George and Mary's three boys were baptised.

Bennett is recorded in The History and Gazetteer of Staffordshire in the years 1833 and 1834 as a Vicar Choral in the Prebend of Bishop's Hull with an annual salary of between £80 and £100 exclusive of his residence in The Close, Lichfield. His occupation and residence is confirmed by the 1841 census, which also reveals him to be a widower, with his daughter Ann recorded as housekeeper, and living with him at The Close, as was Mary, his daughter, who was also widowed and two of her children Alfred and Edgar. The census indicates that William Machin and James Matthews both Lay Vicars also lived at the same property. The Close contained about 62 houses, which were available for members of the Cathedral, but some of the houses were in a poor condition and many clergyman,vergers and Lay Vicars lived outside the Close; at this time about 250 people lived in the Close.

During 1847 a complaint from the Lay Vicar of Longdon, Mr Samuel Pearsall, about the repairs of the property owned by John Bennett indicates there was some dispute about how he had treated his property when Pearsall took it on. However, the Dean and Chapter ruled that because of the time lapsed since Mr Pearsall had taken over the property in 1844, no action was taken against John Bennett.

The 1851 census reveals Bennett living in the Close with his daughters Mary and Ann; however, Jemima, his granddaughter (now aged 29), and her husband Joseph (age 34) where also living in the close with and Maria (9), John (7), Arthur (5), and Anne (4). Mary Palmer died, aged 58, in April 1859 and was buried in The Close. The Lay Vicars were freeholders, and held their post until their death (unless they left or were dismissed). This meant that they continued to receive the income from the Corporation's property, but as they got older many stopped singing and engaged a deputy to sing on their behalf. There is no record of John Bennett securing a deputy's services specifically, but there are several deputies singing at the Cathedral during this time, and at a meeting 7 June 1859 to discuss the Corporation's business, John Bennett was listed as one of three Lay Vicars absent as reported in the Chapter Act Books.

At the age of 90, John was still living at The Close with his daughter Ann and was employing a servant to live in, and his great-granddaughter, Anne Preston, (13) was registered at the same address in the 1861 census. Matthew Bennett, his son, was also living in The Close, and his neighbours were the Prestons (Joseph, Jemima, John and 7 month old Ada).

John died on 23 February 1862, and was buried in the Cathedral Close four days later.
Posted by Richard Shakeshaft at 14:30 No comments: 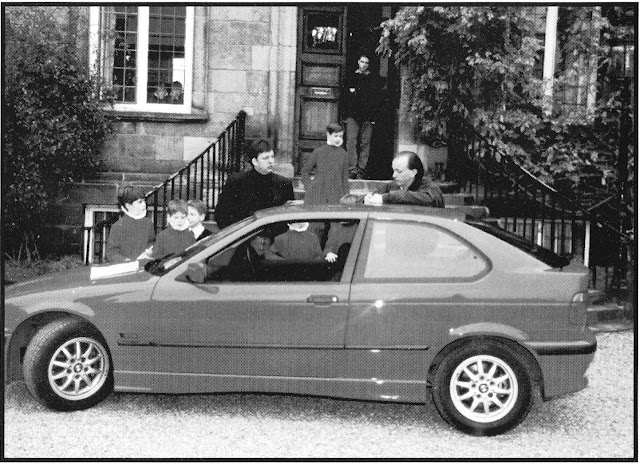 In the Organist and Master of the Choristers' annual report within the magazine, Andrew Lumsden writes

[The choristers] also appeared in the BBC 2 car programme Top Gear, when they had to sing a few ditties and then, with some other hardy folk of all shapes and sizes, clamber over a brand new red BMW Compact! Some were even interviewed by Quentin Wilson. [...] The programme obviously has a large following, because when we were at Keele University a few days after it was broadcast, when I mentioned that some of the audience might recognise one or two of the front row, a large number of heads nodded in agreement.

I have tried, in vain, to find a copy of this edition of Top Gear: if anyone can help, please email.
Posted by Richard Shakeshaft at 10:15 No comments: