Herbert Parker was a Bass Lay Vicar at Lichfield Cathedral from the age of 29 until his death in 1956, 52 years later. I was recently sent a 78 record which he had recorded during his career; unfortunately, there is no date recorded on the disc, but having been recorded in Birmingham it is presumably from some point in his five decades in Lichfield.

The following video is a transcription of the recording which consists of The Wanderer and Awake Beloved. Below the recording are two articles from the Lichfield Mercury which celebrate his fifty years at Lichfield, and then mark his death two years later, respectively. 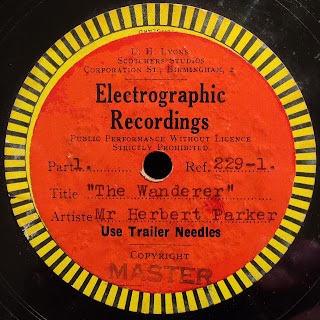 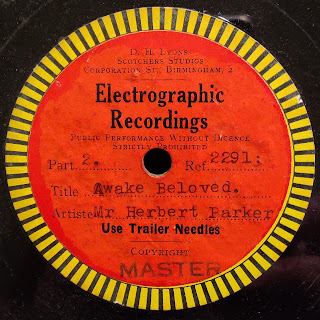 Cathedral veteran who has sung 'Elijah' more than 300 times 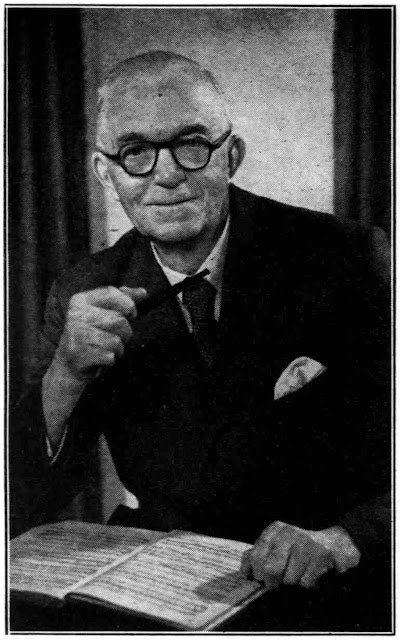 His very wide circle of friends and admirers in Lichfield and throughout the Midlands will, we are confident, wish to be associated with the Mercury in extending hearty congratulations to Mr Herbert Parker, on the completion on Thursday next of fifty years' service as vicar choral of Lichfield Cathedral. Appointed out of 120 applications, Mr Parker was installed as bass vicar choral on July 15, 1904, when the late Mr J B Lott was Cathedral Organist, the Very Revered H M Luckock was Dean, and the Right Reverend Augustus Legge was Bishop of Lichfield.

Mr Herbert Parker was the youngest of a musical family, and from an early age was nurtured in the tradition of good music and good singing. In his teens, he began his training as a singer by taking lessons from his eldest brother who was then studying under an Italian master and was a tenor in Leeds Parish Church choir.

Herbert also began to study the bass solos in the great oratorios, and by the time he was 21 he had mastered most of the bass numbers in Messiah, Elijah, Creation, etc.

About that time, he was sent by his firm to take up a position in Newcastle-upon-Tyne and, having already been a member of the Leeds Philharmonic Society and also the Leeds Choral Union, he at once applied for member of the Newcastle and Gateshead Choral Union. He was tested by the secretary of the Society, who was also the Organist and Choirmaster at a Presbyterian Church, and was, by him, invited to join his choir which he did. There he met the lady whom we now know as Mrs Parker, who was Mayor of Lichfield in 1951, and it also gave him what might be called his start as a professional singing. It happened that the bass singer, David Hughes, who had been engaged to sing the solos in Messiah for the Choral Union, sent a telegram to say he was unable to sing that evening, and the secretary, without hesitation went to Herbert's place of business and asked him to deputise for Mr Hughes. It was something of an ordeal for a young singer to undertake at such short notice, but at the rehearsal, the conductor expressed himself as satisfied and at the concert in the evening, he had a great reception from both audience and chorus, and subsequently received several letters advising him to take up singing as his profession.

Shortly after this event, a vacancy for a bass soloist occurred in Leeds Parish Church choir, for which Mr Parker successfully applied. He went back to Leeds with his mind made up to be a singer. In Newcastle he had continued his training and he now became a pupil of Mr Alfred Benton, organist of Leeds Parish Church and conductor of the Choral Union. This was the hey day of choral singing, when every town and even village had its choral society and engagements came freely. In fact, Mr Parkers remembers one date for which he booked Messiah and had to refuse eight requests for the same date.

His next more was to Lichfield in 1904. He saw the advertisement for a bass vicar choral in Lichfield Cathedral and applied for the post. He was one of 120 applicants, 20 of whom were selected for trial. In this event he was the successful candidate and was installed as vicar choral on July 15.

Before he left Leeds, he had been engaged to sing the part of Beckmesser from Der Meistersingers at the forthcoming Leeds Music Festival in October of that year, and also the understudy new works to be sung at the Festival, including Walford Davies' Everyman and Stanford's Songs of the Sea. This meant many journeys to and from Leeds, but it was a more heartening experience for a young singer at the beginning of his career.

He continued his studies at Lichfield and learned many parts consequent upon his engagements, which took him during the course of years to the Channel Islands in the South, to Inverness in the North, to Jull in the East and to Ireland. He also continued his training in voice production and went to London weekly as a pupil of Mr John Acton who trained many famous singers, such as Norman Allin, Robert Radford and Agnes Nicholls.

As a teacher himself, Mr Parker was, and is, well-known in the Midlands, and several of his pupils are now cathedral singers.

With the coming of radio, a new outlet was opened for singers, and Mr Parker had the pleasure of singing many times from Savoy Hill, Birmingham and Newcastle.

Sometimes he has been asked what his favourite role is, and finds is difficult to make a choice. The most popular successes seem to have been Elijah, which he has sung more than three hundred times, and Messiah, almost as many. Amongst other works he has greatly enjoyed singing are Verdi's Requiem, Elgar's The Apostles and Caractacus, Walford Davies' Everyman, and the St Matthew and St John Passions of Bach.

He has had the privilege of singing under the batons of Sir Charles Stanford, Sir Hubert Parry, Sir Edward Elgar, and other famour English conductors, and with such orchestras as the Halle, Queens Hall, Scottish, Leeds Symphony, etc.

In his early career, Mr Parker met and sang with many famous singers of the day, including Dolores, Ravogli, Agnes Nicholls, Ben Davies, Parry Jones, Marie Brema and Else Suddaby.

Perhaps now he likes best of all singing in the Cathedral the fine bass solos in the anthems written by the great masters of the past.

the Mercury reported on his funeral Friday 27 July 1956

In an atmosphere of solemnity and respect, the funeral service of the late Mr Herbert Parker, for 52 years a Vicar Choral of Lichfield Cathedral, took place at the Cathedral on Monday.

The service was fully choral and the opening prayers were read by the Precentor (Canon S G B Exham). The Dean (Very Rev W S Macpherson) read the lesson and the committal was taken by the Bishop of Lichfield (Dr A S Reeve). Other robed clergy were Canon A T Jenkins, Preb E E F Walter (officiating as the Bishop's Chaplain), Rev H H Follis and Rev L E H Caller.

During the service, the choir sang the 23rd psalm, a special hymn and the anthem If we believe (Goss). Mr A P Porter was at the organ.

At the graveside, Mr Parker's fellow Freemasons placed sprigs of acacia on the coffin, whilst after the service headed by the Provincial Worshipful Brother J Whyld they assembled at the Lodge Room where eulogies were expressed to Past Worshipful Brother Parker and the toast of 'Departed Merit' was drunk. Sympathy to the relatives was expressed by the Worshipful Master.

[following a long list of the great and good of Lichfield who were in attendance,
there is then a tribute by the Dean, the Very Reverend W S Macpherson:]

"I am going to ask you to pause for a moment and remember with thankfulness to Almighty God the long and faithful service of His servant Herbert Parker, who passed to his rest last Thursday after completing fifty-two years as a Lay Vicar of this Cathedral.

"As a singer, nurtured in the tradition of good music and good singing from an early age, Herbert Parker excelled.

"He is still remembered with affection and respect in Leeds Parish Church, that stronghold of sound Church Music, though he left there over half a century ago.

"But though he attained fame as a bass soloist and was in demand literally throughout the length and breadth of this land and sang with some of the greatest singers of his time, he would, I think, have agreed that it was here in this Cathedral that his heart really found its home, and where his greatest work was done. For Herbert Parker was not just a singer, though few could equal him in the power, the accuracy and the quality of his voice even at the age of eighty.

"He was much more than that. The gift he possessed in such rich measure he treasured and trained as being a gift from God; and through all the many years he sang in this Cathedral - and how regular and punctual he was - it was to the Glory of God that he sang.

"His singing was never an end in itself, but always the vehicle through which he strove to help others to glimpse something of the ineffable beauty of God.

"A man who combined a natural humility with his native Yorkshire forthrightness of speech - faithful Churchman and regular Communicant who was helped and supported for over fifty years by a devoted wife, Herbert Parker has left a name and an example which will long be cherished here in the City of adoption, and more especially in this Cathedral which he loved so well, and served so faithfully."

Posted by Richard Shakeshaft at 08:00