'The Art Journal' was an important nineteenth-century British magazine founded in 1839. It was published in London but its readership was global. The March 1862 edition includes a page on the new Skidmore screen installed in Lichfield Cathedral, and the text and illustration are reproduced in full below. The original document can be found online at the HathiTrust.

The Angel Choir at Lincoln, so well known as one of the crowning achievements of the early Gothic of England, derives its title from the group of angelic figures represented as variously engaged in befitting occupations, and placed in the spandrels of the triforium. Boldly sculptured, and remarkable for their freedom of movement and versatility of expression, these angels of the era of Eleanor of Castile are elevated about sixty feet from the spectators who stand in the presbytery below. And they have been designed expressly for their lofty positions: and their proper effect is then only duly estimated, when some sixty feet of space intervene between the eyes that gaze upon them and themselves.

Lichfield Cathedral may now claim to possess, not indeed a second Angel Choir, but a choir screen that most justly may derive its distinctive title from the celestial hierarchy. The new Angel Choir Screen at Lichfield is one of the most remarkable, the most beautiful, and the most gratifying productions of the era of Queen Victoria. It is as original in its conception as in its execution it is absolutely unsurpassed. What renders it so eminently valuable is its high character, as the exponent of the capabilities of living English workers in the hard metals. This screen, unlike every other cathedral choir screen, is entirely composed of iron, brass, and copper — the constructive details of the composition being produced in the iron and brass, and the angel figures that give a distinctive character to the whole being executed in copper. It is with these copper statuettes (for they are considerably less than full life-size) that we are at present particularly concerned, and therefore we now must be content to leave the screen itself with no more than a general expression of our warmest admiration.

On either side of the central entrance are four enriched circles of open work, resting upon the arches of the lateral arcades, and rising above their intervening spandrels. Standing upon a corbel of exquisite foliage — the abacus which forms the actual pedestal being encircled with a coronet-like border of burnished brass — in front of each circle, is one of the group of angel figures. These figures are set in pairs, back to back; and thus they are, in all, sixteen in number, — eight of them facing eastwards towards the interior of the choir; and the second group, of the same number of figures, looking to the west, and consequently having their faces towards the nave. The figures are all winged: some are playing upon instruments of music, and others, with uplifted hands, appear as in the act of taking such a part as angels might take in a hymn of the loftiest adoration. And, so far as human thought may conceive, and human hands may execute, what may be accepted as the personal forms of the ministrants of heaven, these figures are veritable figures of angels. They also most truly constitute an angelic choir; the feeling of harmonious praise pervades the entire group. Each individual sympathises with every other; and all are engaged with kindred devotion in a common act, which all feel alike, and all express with perfect unanimity. The variety of these figures is no less remarkable than the distinct and emphatic individuality of each figure. They are at once earnest and graceful, animated and dignified. The wings, which are all gemmed with eyes, are adjusted to various attitudes in the different. figures. Some are raised aloft, as in our example, while others droop, and convey the sentiment of calm repose. These wings are distinguished by the peculiar originality of the thought, which has expressed itself in their majestic plumage. In them the ideal of such wings as might be imagined to convey hither and thither the messengers of light, is realised with a truly wonderful truthfulness; so that if man’s conception of an angel requires the existence of actual wings as appendages of his person, these indeed are angels’ wings. The figure from which our engraving has been drawn, stands second from the centre in the north-eastern group. To do full justice to the original, except by photography, has been found to be impossible. Our woodcut, however, has been thoughtfully and carefully executed, so that it may be accepted as giving a thoroughly correct conception of this eminently beautiful figure. It is to be borne in mind that this particular figure has not been selected for engraving, in consequence of possessing any pre-eminent excellence; on the contrary, all are absolutely equal in merit as works of Art, while in their treatment all have their several distinct characteristics. 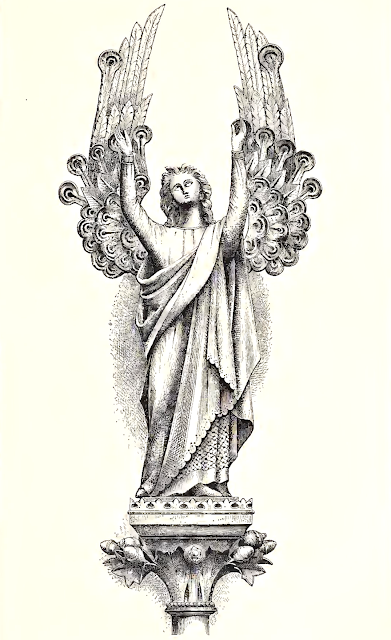 This fine screen, with its admirable statuettes, is the production of Mr Skidmore, the artist who presides over and directs so ably the important establishment for producing architectural and other artistic metal-work, at Coventry. Mr Skidmore’s Lichfield Screen is a work that may be regarded with unqualified and most just pride, seeing that it is equally honourable to his own rare ability, to the Coventry establishment for metal-working, to the authorities of Lichfield, and to the distinguished architect who directed the recent restoration of their cathedral. We congratulate all parties on the success of the Lichfield Screen, and rejoice to record our own high appreciation of so beautiful and so felicitous a work. Our correspondent, ‘An Architect,’ glances at this screen as affording a striking contrast to the metal-work in the Great Exhibition Building. We ourselves are able to corroborate his views, from our own personal study of both the South Kensington castings and Mr Skidmore’s bandwrought works; with him, therefore, we inquire, with commingled surprise and regret, why was not the South Kensington metal-work produced under the direction of Mr Skidmore, at Coventry?
Posted by Richard Shakeshaft at 13:00